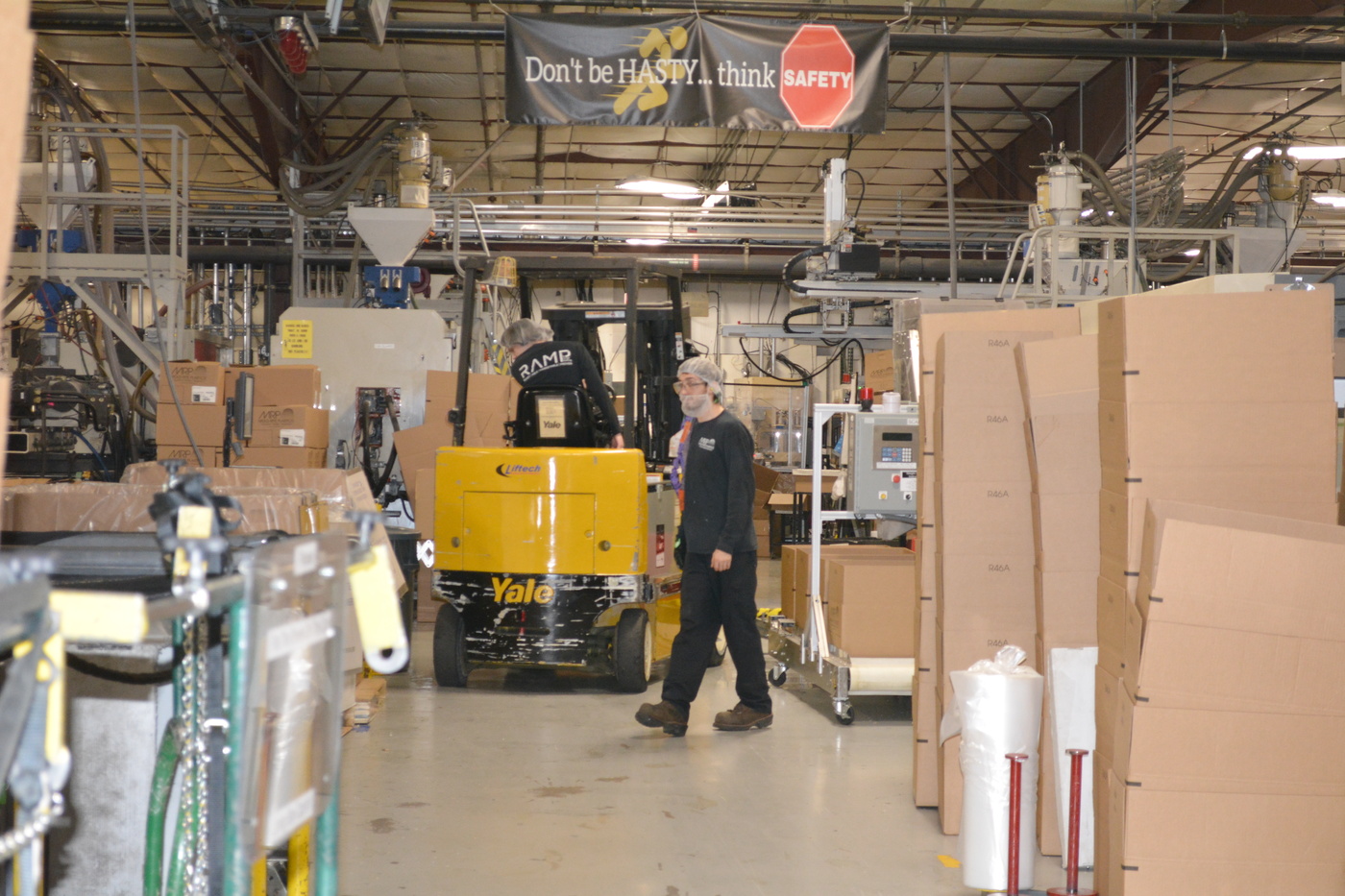 May 28, 2019 — Finding jobs in the North Country is always an issue. But with unemployment at near-record lows, it’s employers who are struggling these days, looking for people to hire. A new work placement program is trying to match graduating seniors with Plattsburgh’s factories and help find the workforce of the future.

It's called RAMP, which stands for Ready, Able, Marketable, Proven. Ideally, a RAMP participant is all these things at the end of a year of work experiences in entry-level factory work.

Last spring, Connor Burke was a senior at Peru High School, and he had no idea what he wanted to do when he graduated. He'd thought about working with animals as a veternarian or vet-tech, but wasn't sure. He wasn't ready to commit to college.

“Cause there were just so many things I could have done with my life… I guess it was the pressure of picking one of them? I just wasn’t sure what I wanted to do.”

10 miles away was Mold-Rite Plastics, one of Plattsburgh’s biggest factories and private employers – they make millions of plastics caps every day. They have a lot of entry-level positions, but with the current low unemployment rate, they can struggle to fill them.

This gap – between companies looking to hire for entry level positions and the youngest portion of the workforce, is something Elizabeth and David Coryer have been thinking about for a long time. They started a staffing agency in Plattsburgh in 2016, Coryer Staffing. From the beginning, creating a program like RAMP was on their minds.

David has worked at staffing agencies for over two decades, and says companies were always asking him: where’s the future workforce? Elizabeth was a high school Spanish teacher:

“Several of the schools I taught at and that I was familiar with, they have these post-graduate programs for students that needed just one more year before they went off to college," Elizabeth said. "And David always had an idea in his head of building a strong relationship with those individuals who are graduating from high school who are going immediately going into the workforce.”

Together, they came up with the idea of creating a year-long, post-grad, work experience program designed for high school graduates without secondary education plans. Participants would be paid, full-time workers, and try a new job every 3 to 6 months.

RAMP’s pilot year started last July. Connor Burke was one of 29 participants, that the Coryers found by talking at local high schools and asking counselors to tell students about RAMP. Claire Cantwell-Jones works at Peru High School as a career counselor, and she says the kids she worries about are the ones without a clear path post-graduation.

“My role is working with students to apply for jobs and interviews. But the tough part is after June comes around, my reach stops, and I hope I’ve done enough."

She was excited to hear about RAMP because it presented an option for her students to gain real-world work experience while working full time and recieving benefits. And it's not just a work placement program; there's a lot of support built into RAMP, from the staff at Coryer Staffing, but also from a full-time guidance counselor, Kevin Patnode. Patnode taught high school for decades. He was hired to guide participants through the pilot year.

“I get the fun part. I get to deal with the people as they come out of school and help them. We do everything, we use every tool in the tool box to make them successful.”

That means checking in with participants, talking to their employers, and helping them work through both logistical and emotional challenges. He’s a sympathetic ear, a cheerleader, even a chauffeur if a ride falls through.

Claire Cantwell-Jones was Connor Burke's career counselor, and she's the one who suggested Connor try RAMP.

"She said I might be a really good candidate for it. She said I'd be paid and trained, and that it could be a good route outside of college, if you didn't know what you wanted to do, just like me."

RAMP’s pilot year started last July, and Connor Burke was one of 29 participants. His first placement was at Mold-Rite Plastics, where almost all the RAMP kids did a stint.

It’s textbook entry level factory work. One gigantic building is split up into football field sized departments, and it’s filled with cardboard boxes and machinery. It's loud, and busy, and most work 'on the floor' consists of workers 'assisting' different machines. Connor spent three months packing plastic caps as they came off a machine. Then he was promoted to color mixer - he mixed colors for different caps and loaded the colors into machinery.

The environment and the work schedule can be a lot to get used to, says Eric Zeisloft, the Plant Manager.

“I mean, many of them came in with no job experience whatsoever."

Yet all but 3 of the RAMP kids finished a full Mold-Rite rotation. Two actually asked to stay when it was time to switch to another company. Both still work there  - one as a mechanic, and one in Quality Assurance. Zeisloft says it was exciting to watch all the participants grow.

"It was exciting to see them learn how to be a responsible worker, and essentially grow into adults.”

The work hasn’t been for everyone. Three left in the middle of the first rotation (two because they said the work was too physically demanding, one because they decided they wanted to pursue college), and eight participants left after completing the first three months - one rotation was enough for them.

The work and the paycheck

Connor stayed at Mold-Rite for six months, then moved to Schluyter Systems for his second rotation, which makes tile installation products. Connor works in a warehouse at their Plattsburgh compound, which employs about 500 employees, as a picker.

“What I do is I go around the warehouses and I pick certain products that I put on carts. And the other employees, known as packers, they pack them and they put them on the trucks.”

Connor works from stacks of order sheets, and plans his routes carefully so he doesn’t waste time or energy. It’s repetitive, though not easy work, but Connor says he enjoys it.

But he really enjoys the paycheck. RAMP’s entry-level jobs pay between $12.50 and $15.00 an hour. They’re full time and include benefits. This program has catapulted Connor ahead of a lot of his peers.

“A lot of the people I know from out of school are either working at Dunkin Donuts or other like, little fast food places."

Initially, Connor worried about being able to keep up. He says family members and friends expressed doubt he could do it.

"They said I couldn't do it out of high school, that I'd need to start with something lower-paying, or simpler. At first I was kind of worried, like I'm not going to know where my locations are, or how to find stuff. But after a couple of days, I knew the warehouse like the back of my hand.”

Connor says he’s gained a lot of confidence and pride in himself. He marvels at how far he’s come from when his high school career counselor, Claire Cantwell Jones, first suggested he consider RAMP.

"This program has helped me so much, grown me up mentally and physically.”

Connor isn’t sure what he’ll do at the end of June, when the year is up – he’s considering staying at Schyluter Systems.

This year’s high school seniors graduate in June. Right now RAMP is figuring out how many participants they’ll have for 2019 to 2020. They expect between 50 and 100.